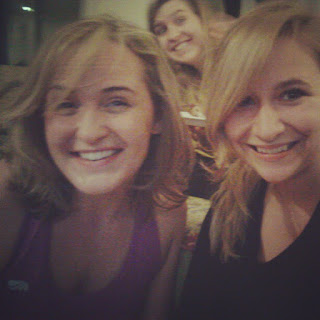 I received a lot of feedback on my post last week about confronting fears.

While a lot of people found it inspiring, others were confused by the idea that fears hold people back.

To those friends, the logical response to fear of failure is to try harder not to fail.

I wish my fears worked that way.

Instead of my fear of failure thrusting me forward and motivating me to achieve, it locked me deeper into my comfort zone. I didn't want to speak up for fear of saying anything stupid. I didn't want to take risks because, at the end of the day my life was okay.

When I moved to DC I was finally surrounded by people who were as driven and ambitious as I was. And it was okay that I was the new girl in town and didn't quite know how everything worked—I asked a lot of questions and tried to learn as quickly as possible.

But now, after a few years of living here and working in the political space, I've found myself confronting something new: fear of not being worthy.

I know I can't be alone on this.

I fight insecurities about not being good enough, a creeping feeling in meetings that maybe I don't understand my craft as well as everyone else.

And my initial, counter-intuitive response to those fears was not to research harder, read more about my field, and ask more questions—my response was to shut down.

At first it was easy enough to ignore and appease—then one afternoon I walked out of a briefing at which I was expected to make remarks about social media because I was absolutely terrified that my voice would shake and I would say something idiotic. As I walked out of the building and into the metro I realized that something had to change. This was not just stifling my growth—it was impacting my ability to do my job well.

Recently a friend and I talked about how women in political communications don't like to talk about their careers. We're less likely than men to sit on panels and talk not just about our field of expertise but about why we're passionate about what we do.

We're humble, we're not natural self-promoters—our energy is typically devoted to promoting other people and causes.

Last year when I sat on a panel to talk about Pinterest in politics I was moments from having a full blown panic attack from the time the panel began until it ended. I was confronted with the realization that everyone on the panel was smarter than me, they deserved to be there, and they all knew their craft better than I did. I just worked in social media and thought Pinterest was really neat. Why was I asked to be there and would it be alright if I just walked out of the room?

Eventually after stumbling through a few awkward questions, I realized I had plenty to contribute to the conversation. I had meaningful points to add and understood the value and interrelatedness of this space... and it was a really exciting topic about something I loved. Why was my first instinct to tell myself that I wasn't good enough?

It mocks the meat upon which it feeds. If you tell yourself that you're not good enough, eventually you're going to start believing it.

So what am I doing differently now?

Well, first off, I'm not hiding from opportunities to speak publicly anymore. I practice with friends and have told them that I need their advice and encouragement. I'm not concealing my fear and letting it grow silently in my soul—I've brought it out, I'm talking about it, and I'm going to get over it.

Does my voice still shake when I have to speak in a crowded room? Sometimes.

But I'd rather sound nervous while saying something of value than stay silent about a space I'm so passionate about.