Vacations... as a Diagnostic Tool. 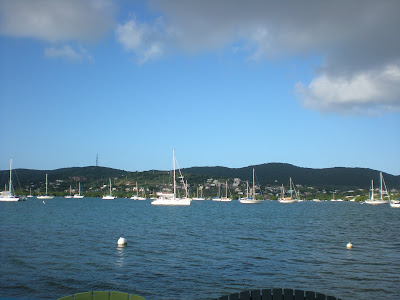 I've taken three vacations this year and summer is still months away. But somehow that isn't enough. I can't seem to work a straight week in my office without wanting to lie down on the floor and just give up at this whole pretense of being a responsible grown up.

The hilarious bit is that I work on my vacations. Because I love working. My work ethic is not the problem. I ran around New Orleans like a madwoman and accomplished more in a day than most people do in a week. I didn't do it for myself and I did it without pay. Why? Because that sort of thing, in my OCD little world, is fun.

He and I went to Puerto Rico, drank a lot of beer, wandered around a rain forest, and swam in the ocean off the coast of a tiny island. And I was miserable. I cried whenever he wasn't looking. I had way too much time to realize how much was wrong with us. As I ventured precariously into the water, the waves higher than any I'd ever attempted, I looked at him and said "I need you to pretend for five minutes that you're my boyfriend and that you actually like me." I said it as if I was asking to borrow his pen. I didn't think about it before I said it; I just knew, at that moment, that that was what I needed. I needed him to act like he gave a damn just for a little while. He picked me up and helped me through the waves and we gave each other salty, wet smooches. It was the happiest I had been on the entire trip even though I got sand in my hair and was waterlogged for weeks afterward.

Then we broke up.

I am infinitely more productive and focused when I am single. I have a propensity to structure my life around the person I am dating... which would be fine if I ever did so with the right person, but that hasn't happened yet.

And I'm getting more OK with that every day.