On Monday (the day before my birthday) I was chosen as one of Red Alert Politics 30 Under 30. 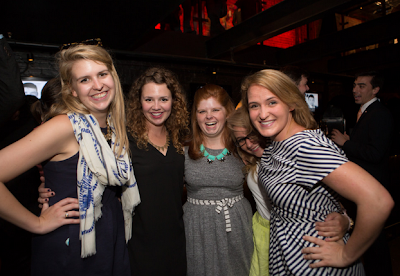 They threw a great party at Living Social's DC office. It was honestly the perfect birthday gift—I got a huge party with my friends... and everything said I was still 27. Scores all around.

So of course since a year has passed I feel like I have to reflect and measure... because that's what I do.

I write a lot about my personal vulnerability and how important it is for me to write and live openly—and I'd never really heard anyone else talk about why it was important to be vulnerable until I watched Dr. Brené Brown's TED talk.

Go watch it and come back. I'll wait.

It's like the woman has been reading my diary:


The one thing that keeps us from connecting with people is our fear that we're not worthy of that connection.

When I was a freshman in college I remember being confused when a girl I'd met the night before (who I thought was way, way cooler than I was) knocked on my dorm room door. I was even more confused when she sat on the end of my bed and just started talking about what had happened after I left and then wanted to get coffee. I said to myself, oh, she wants to be my friend... this is what making friends is like. Act normal.

And oh Jesus did I choose wrong.

I surrounded myself with the cool kids, the affluent kids, the ones who dressed well and smoked a ton of cigarettes.

I was drawn to the other kids—the nice ones, the ones dressed like idiots, who smoked a ton of cigarettes and listened to the kind of music I liked and would have probably liked me for who I was if I'd had the courage to be that person... or if I'd felt worthy of that connection.

I was so terrified of being rejected by them that I rejected them.

I gravitated toward people who made me feel bad about myself, who weren't challenging me to be better, who didn't want to be better, and who were just... not strong people with honed sense of purpose.

When I finally took a little audit of my life, I ran away from them. Fast.

I've written a lot about getting away from that and the importance of surrounding myself with the right people so I won't repeat myself.

It took me a lot of time, but I finally grew a sense of worthiness—which is very different from a sense of entitlement. I didn't wake up and decide that I was amazing and deserved great relationships, I woke up and realized that no, I didn't deserve anything... but I was worthy of trying.

Back to Dr. Brown. She pulled stories out of her research from people who had a sense of love and belonging and found commonalities:


They fully embraced vulnerability... they believed that what made them vulnerable made them beautiful. They didn't talk about vulnerability being comfortable or excruciating, they just talked about it being necessary. They talked about the willingness to say I love you first... willing to invest in a relationship that may or may not work out...

...because to feel this vulnerable means we're alive.

As I listened to her finish this talk I thought, yes, exactly—finally someone stood on a stage and explained why no matter how many times I'm hurt or how many times I fail, I keep getting up and saying well that's okay, let's go do it again.

And if you've been a part of it—thank you.