10 things YOU should know about adopting a dog in the city.

1. If you wait for the "right time" to adopt a dog you will never adopt a dog. The biggest hurdle for me was the mental one. The whole drive to pick up Daisy Mae I kept telling myself I would regret it—that I would be too busy with work, she would destroy my apartment, she'd take all my extra money, that I couldn't do it. As soon as she melted into my arms I realized I was dead wrong about all of it and that no matter what, I'd make it work. 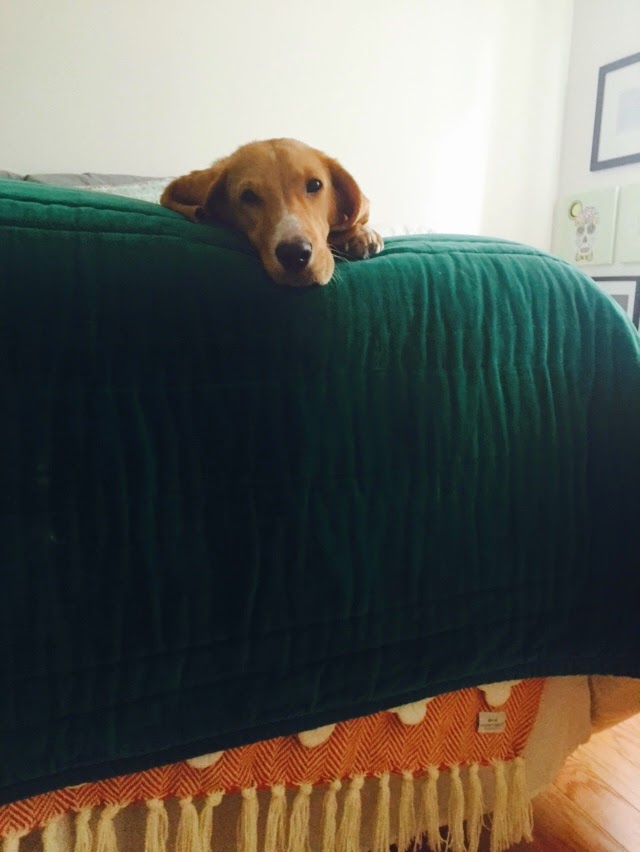 2. Poop is like emotional wreckage—you can't just walk away from it, you have to address it right there, pick up the pieces, and move on. If you don't, expect a whole lot of public shame and a life full of regret. Like I said, I grew up with dogs... in Alabama. Having a dog in the city is a whole different thing. In the South, you let your dog out and they run into the woods behind your house and you never see or smell or deal with their poop—ever. In the city, if you forget to bring a bag with you—or, Daisy's FAVORITE—if you bring one bag with you and your dog poops twice, you can expect a whole hell of a lot of dirty looks from people. Last week Daisy decided to poop on a crowded sidewalk minutes after she already had her first poop and I was bagless. I don't know that I'll ever live the shame down. I immediately bought a bag roll holder and clipped it to her leash so I will never face such a nightmare again. 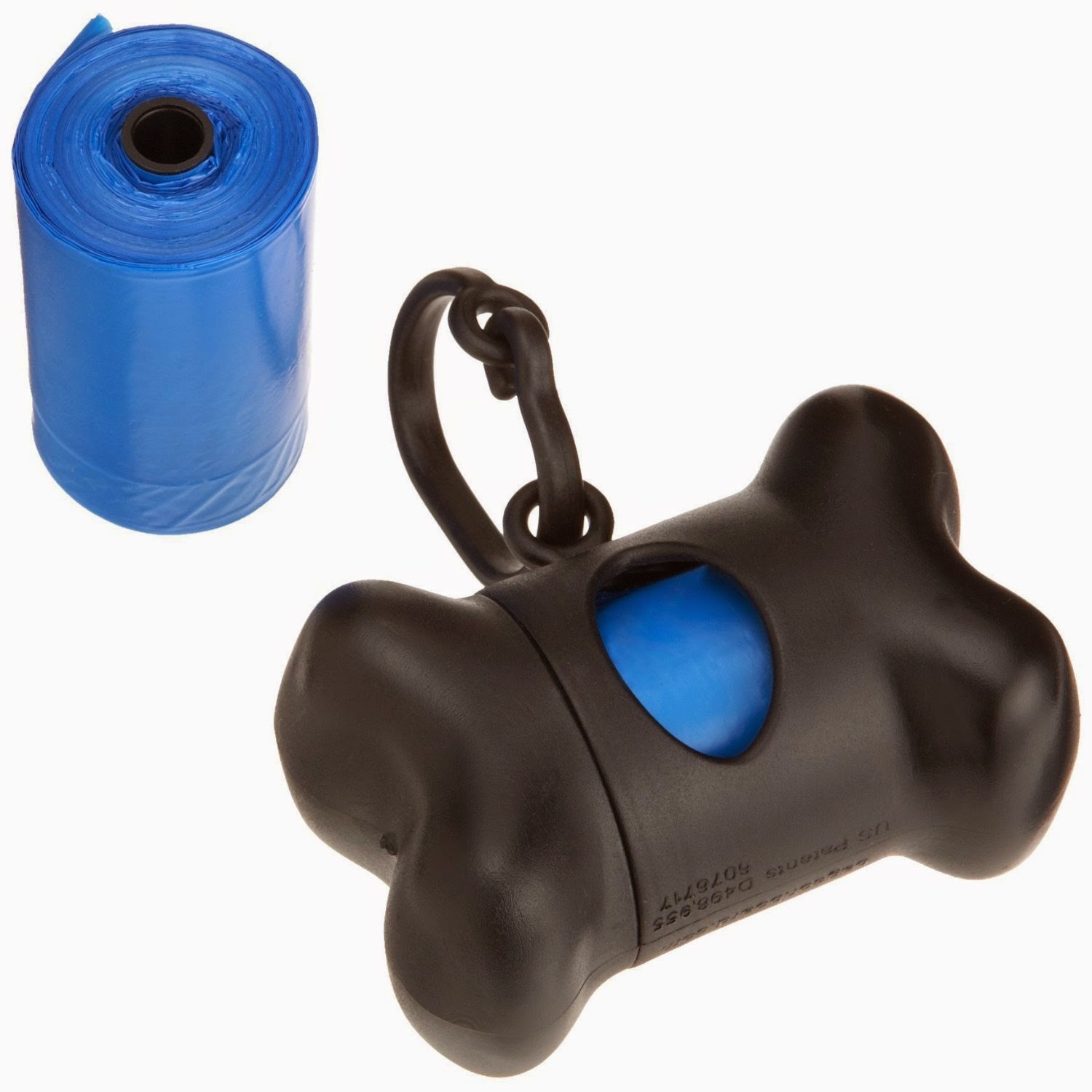 I never realized I would have so many completely candid conversations about poop with my boyfriend. "I just took Daisy for a walk—she pooped!" "Oh good girl!" Truly, the more you deal with poop or wipe wee off the floor the more normal it becomes.

3. Look out for chicken bones. One of the first and most important things I was told during my dog walking training is that you have to be constantly vigilant when walking. You can't text and walk or look around too much because trash (specifically chicken bones—the most prevalent litter from Thomas Circle to the U Street corridor) is everywhere—in planters, next to trash cans (seriously, it was too hard to walk an extra foot and throw it in?), in gutters—and your dog will want to eat it no matter how many times you say NO. See also: birds, squirrels, other dogs.

Sorry to paint a morbid picture, but if you're looking down at your phone as a bird lands in the street and your puppy lunges for it, well, you can see how dangerous that would be.

4. Get ready for a whole lot of social interaction with strangers. In DC, if you smile at people on the sidewalk and chat them up when they're walking somewhere, there's a chance your picture will end up on a street harassment blog. It's weird and you shouldn't do it. Sidewalks are not for eye contact and smiling amongst strangers... unless you have a dog. When you have a dog you instantly become 100% more popular and everyone will smile at you and say hi and want to be your friend. It rules.

Dog walkers have to avoid letting the dogs they walk socialize with other dogs they encounter* because if something happens to either dog, they're responsible. So I never learned the etiquette of meeting other people with dogs on the sidewalk. I constantly ask "is it okay if we say hi?" or "I'm trying to socialize her as much as I can do you mind letting them meet?" and am almost always met with a yes. Then, while they sniff each other out and play, you'll have the ritual "what's your dog's name?" and "how old is she?" conversation I could now have in my sleep.

*It's easy to tell owners from dog walkers: Walkers usually have huge sets of keys, the leash is secured to a bungee cord to their belt or bag, and their body language says "nope." They're not being rude, they're just doing their jobs. Likewise, if an owner is pulling his leash taut and skirting the edge of the sidewalk away from you, it's a pretty clear sign you should keep walking.

5. Be kind to Uber and Uber will be kind to you. If you're like me and committed to a car-free life of walking, biking, and ubering everywhere, you might think it's a reason not to get a dog. It's not. On the very rare occasion that you need to take your dog to the vet and you're too far to walk, call your Uber and immediately hit contact driver > call. I'm talkin the SECOND you have a confirmed driver. Don't let some poor guy make a U-turn on 14th and get half way to your building before you call to ask if it's cool that you have a dog. Last week when I took Daisy to the vet I called and gave a very quick ramble "I have a small dog and we need to go to the vet—I have a blanket, lint roller, and wipes and she'll be fine sitting on the floor or in my lap and we'll make sure it's 100% spotless when we get out" and he said it was fine. He told me that once someone had surprised him with a dog when he arrived and that it was really upsetting and thanked me for doing the right thing. These people work really hard all day—and keeping their cars clean is crucial to their ratings, so communicate well and bring supplies to clean up any hair or dirt from your dog. 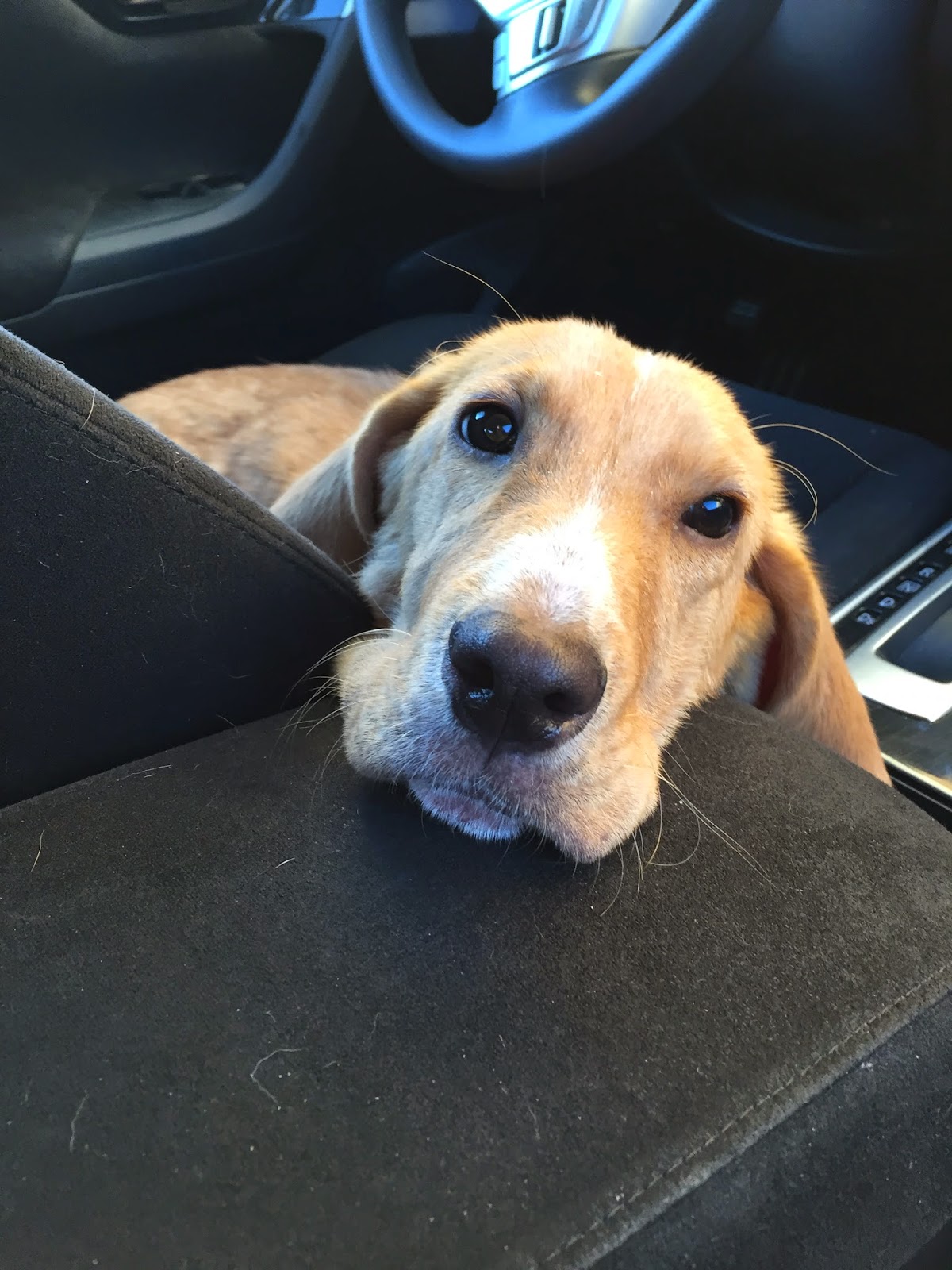 You can't lint roll away my love.


6. Big Brother is watching you... r dog. When you adopt a dog in the District of Columbia, you have to register him or her. Until they have their rabies and distemper vaccinations, they cannot/should not be admitted to any kennels or enter dog parks and really shouldn't socialize with other dogs. I'm waiting until after she's spayed in a few weeks because it's $50 for a non-spayed dog and $15 for a spayed dog. Daisy is two weeks, one form, and $15 from being a legitimate resident of DC. We're both very excited.

7. You won't be a bad dog mom... (or dad) you'll just think you are about 39482058 times a day. Daisy's paw went into a pot hole as we crossed the street. She got a big hunk off the end of a nylabone and started choking on it seconds after I read the fine print and made SURE it was age and breed appropriate. You hug them and kiss them and give them treats and tell them you're so sorry and move on—they will always forgive you. 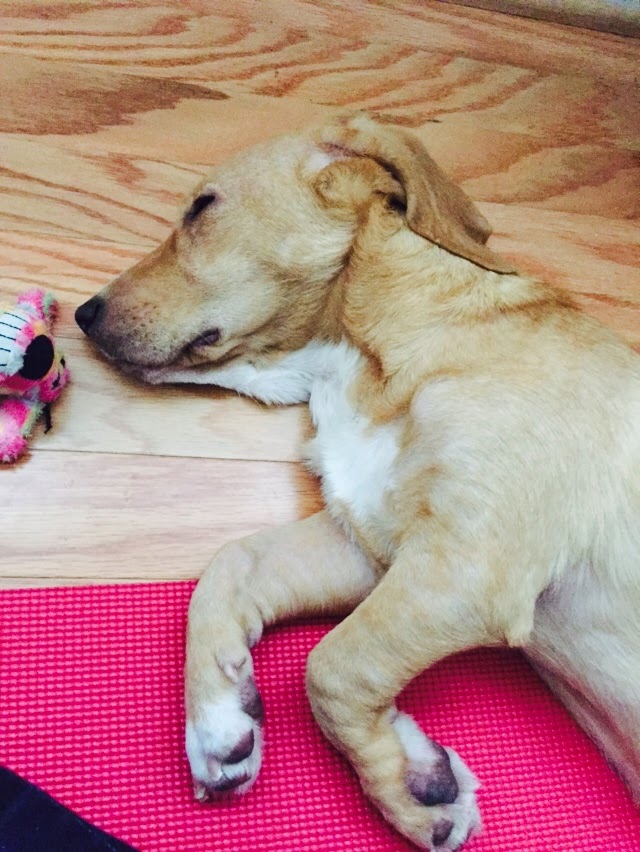 8. You're not alone. This is such a dog-friendly city and fellow dog owners have a sort of we're all in this together camaraderie I love. They'll give you great advice about what vets to see and what dog walkers to use. Also, since I've built up a good amount of dog-watching karma, I feel totally comfortable calling up my neighbors to ask if they'll walk Daisy if I have a busy day planned and can't get home to walk her on time. Don't limit yourself to people who have dogs—ask your dog-less friends if they can help. God knows they want to.

9. Just because you can doesn't mean you should. A lot of shops around the city allow dogs inside. So, yes, you can take your puppy to Lululemon... but do you really want to wander around with a leash wrapping around sales racks when you're on a mission for new crops? No. I'm definitely looking forward to patio weather and taking Daisy along to coffee and brunch dates, but until then I really try to keep dog walking and errand running separate.

A lot of people have strong opinions about whether or not dogs should be leashed up outside of coffee shops or stores. I'm testing out the water—I think as long as I'm gone under 5 minutes and I can see her the entire time, it's OK. I would never go into a store and shop around with her leashed up outside. Mostly because she's so sweet and precious I'm worried someone would snatch her up. Also I make sure the leash is secured to something that won't reach the street/gutter and (duh) I do a quick scan around for litter... 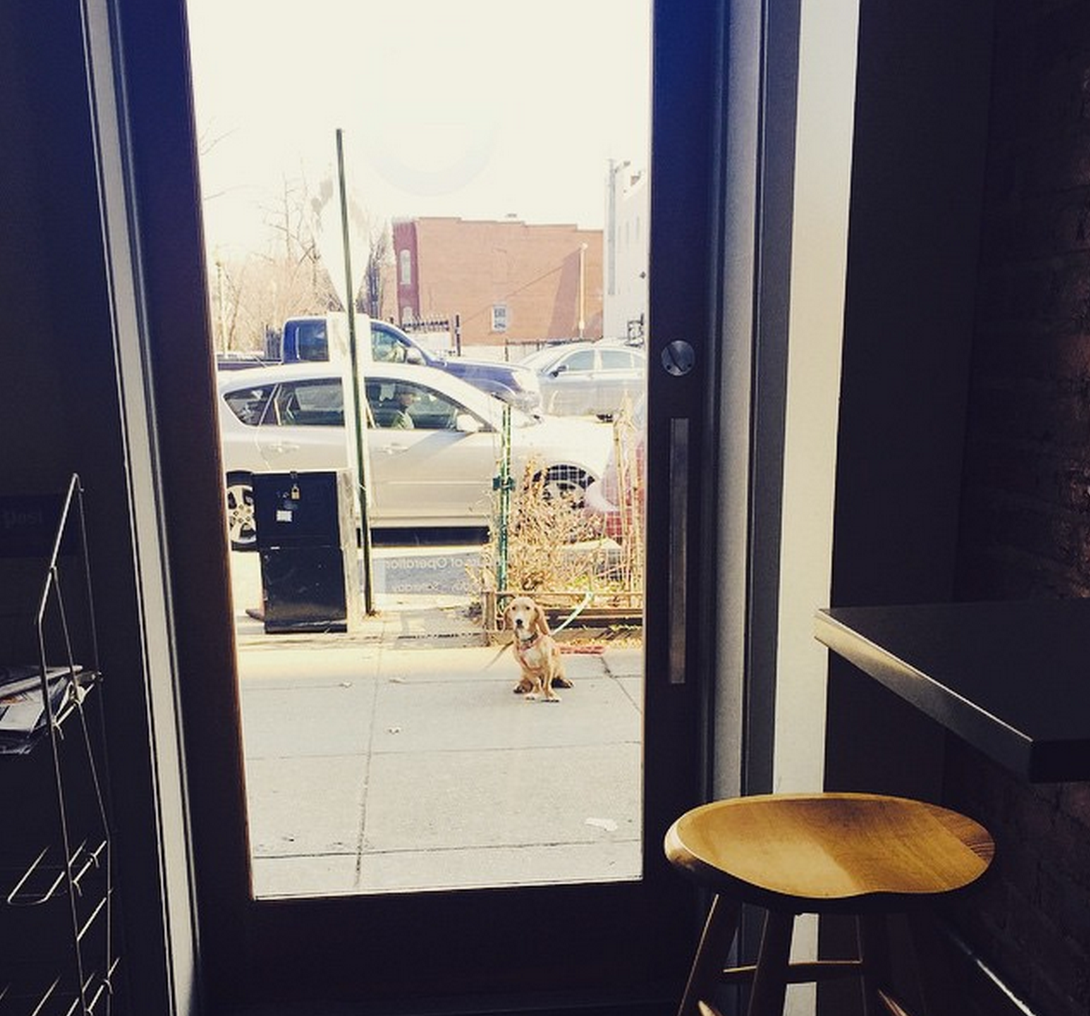 ... not that she ever takes her eyes off the door for even a second.

10. You will need gear... but you won't need ALL the gear. It's easy to go nuts and buy way more stuff than you need. I put Daisy in a coat when it's below freezing and a rain vest when it's raining and even that is probably excessive. I use her harness for long walks and just a leash to her collar when we're going on quick wee walks. I don't really know that she needs more than that. Dog vest sizing is all over the place depending on the brand. You're a 4 at Anthropologie and a 6 at J. Crew—you know the drill. Look at size charts, measure, and use Amazon Prime so you can return stuff for free.

- I've been using Musher's Secret on her paws instead of mitts to protect from the ice and salt but I'm ordering mitts for the next snow because the city goes NUTS piling salt on the sidewalks. Apply before walks—if you apply if after a walk on already chapped/burned paws you're going to be looking at one sad puppy.
- Nature's Miracle will keep your apartment from smelling like a kennel.
- We already covered the crucial poo bag leash clip. No brainer.
- An assortment of things to chew on and small, healthy treats for training.
- Training pads. But NOT for "training" because I don't want her to think it's cool to wee on the floor inside—I use them by flipping them upside down over her occasional accidents because then I don't have to touch pee and use a half-roll of paper towels. Yes, I'm a genius I know. 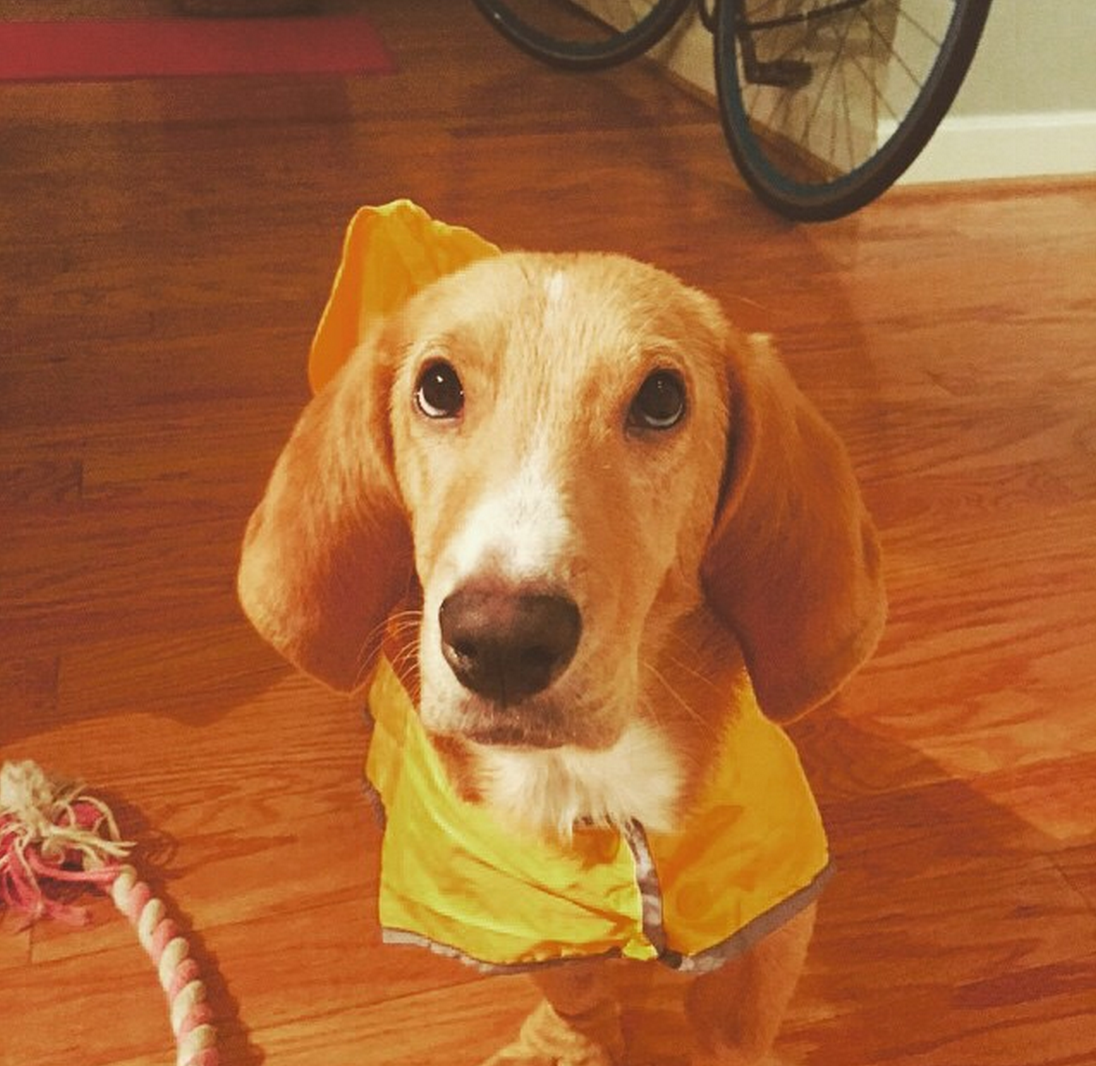 Most Importantly: Everything always comes together in the end. I thought having a dog would distract me from work—but if anything it's made me more productive because I have to be so much more organized and structured with how I approach each day. Sure I've had nights when I've been up every two hours taking her to wee and days when I can't get out of the office on time to walk her during the day, but as Hannibal Buress says, take it one day at a time: That's how time works.

Want to adopt a dog in DC? Here are some great places to start: